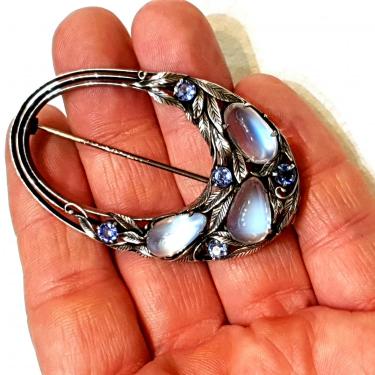 Bernard Instone (1891-1987) combined an eye for exceptional design with a desire to create jewellery to suit every client while also remaining affordable.

Instone was born in Birmingham and, inspired by his older brother Lewis, won a scholarship to the city’s Central School of Art aged just 12 years old. He went on to work in Birmingham’s jewellery district before working in Berlin with Emile Lettré and in Westerham, Kent, with John Paul Cooper (from 1911-12).

After serving in World War One, Instone returned to Birmingham and established the Langston Silver Works in 1919. There he made silver jewellery, and some tablewares.
His designs were in the Arts & Crafts idiom, set with semi-precious stones such as lapis, cornelian, chrysophase, amethyst, citrine, peridot and smoky quartz. Other pieces were decorated with pastel-toned enamel, featuring small, pretty flowers. The wide range of stones and colours allowed him to make jewellery that suited the wearer’s skin tone. A few pieces were made from gold. Most of the decoration was inspired by the English countryside, and motifs include leaves and berries.